The department of La Libertad features a varied relief, starting from the coastline, passing though the highlands (Andes) of Otuzco, Julcan, and Santiago de Chuco, and ending in the upper jungle (The Amazon Rain Forest) at the border of the Department of San Martin. The coast enjoys beaches and fertile valleys that are very important to the national agricultural production. Trujillo, the capital of the department, is known as the city of eternal spring because of its blessed climate and festive atmosphere. The area was inhabited by two important, ancient Peruvian civilizations, the Mochica and the Chimú, and later, it became an important vice royal city. Among its uncountable archeological attractions, there is Chan Chan, the largest mud city in the Americas and ancient capital for the Chimú. UNESCO placed it on the World Cultural Heritage List in 1986. There, you can see the remarkable huacas (pre-Incan sacred places) built by the Mochicas like the Huaca of the Sun and of the Moon, which measure more than twenty meters. In addition, the El Brujo complex, decorated with inspiring figures of dancers and warriors. The city also has a splendid Colonial architecture where you will want to see the Cathedral, the Archbishop’s Palace, the Church of the Company of Jesus Christ, the monastery of El Carmen, and the many Colonial houses. The Huanchaco beach resort is only fifteen minutes away from the city. It is famous for the caballitos de totora, which are lightweight boats made of totora reeds that have been used to cut through the ocean since the time of the Mochicas and Chimús. There, you can enjoy exquisite seafood or simply bask in the glory of a day at the beach. 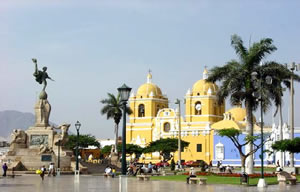 The city of Trujillo has an arid, semi-warm climate with an average maximum temperature of 22.7ºC (72.9ºF), and a minimum of 15.8ºC (60.4ºF) with no rain throughout the year. However, when the El Niño Phenomena happens, the weather changes, the level of precipitation increases, and temperatures can rise. 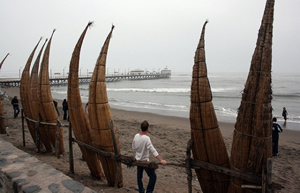 The visit of the Trujillo City includes the Main Square (the vastest of the country) Built in 1666; it stores precious works of art, specifically paintings of the Cusco School as well as sculptures. The Santo Domingo Church and some of the most beautiful colonial houses like the «Casa Mayorazgo», It has a large main patio and an ancient well. From the outside, you can view its corner Mudejar style balcony. In this house, a valuable money collection is kept, the «Casa Bracamonte», It represents two eras since it combines Vice royal elements of the eighteenth century with Republican elements of the nineteenth, and the «Casa de la Emancipación» In this place, also known as “De Madalengoitia”, the Marquis of Torre Tagle prepared the Trujillo declaration of independence in 1820. Finally, we will end this tour with the visit of the city walls of the 17th century, built in order to protect this city from the pirates. Return to the hotel. 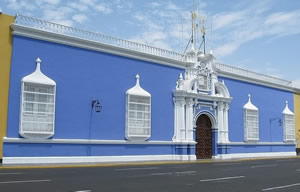 The visit begins with the Arco Iris Temple, also known as «Huaca El Dragon», built by the Chimu culture between the 11th and the 15th century and surrounded by a 6 meters high wall. The small museum placed there will help you to discover the different kinds of architectonical Moche and Chimu works. You are also going to benefit from a fantastic sun and light. After that, we are going to visit the imposing architectonic complex of Chan Chan extended over more than 18 km2. The Tschudi Palace, placed in the southwest of Chan Chan, is one of the most well-preserved and well-decorated palaces. It is decorated with geometric shapes and low-relieves animal draws. We will also visit the ceremonial places, the grain stores and the cemetery. 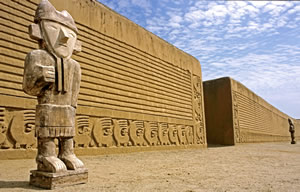 Huanchaco is a beachside town of Mochica origin and a popular vacation spot. It is the most visited beach of Trujillo. Situated 12 km northwest of the city in a bay, on a terrace at the foot of Campana Mountain, Huanchaco is notable for its surf breaks and its caballitos de totora, and its ceviche. Huanchaco is near the ruin of Chan Chan. Huanchaco was approved as a World Surfing Reserve by the organization Save The Waves Coalition in 2012 This historic town is part of the tourist circuit called the "Moche Route" or "RutaMoche". Today it is still a beautiful beach that, despite its modernity, still retains its old charm. 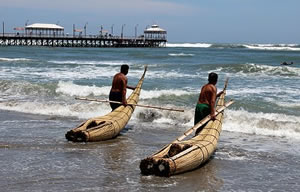 By crossing the Moche countryside, we will see the traditional agricultural methods. The Sun and Moon Temple (Huacadel Sol y de la Luna) are located between the fields and the desert. The Sun Temple functioned as the political-administrative center and the Moon Temple as the ceremonial center. The Sun Temple was made with more than 100 million of dry mud bricks and it still has its original 45 meters of high! On the other hand, the Moon Temple is composed of 6 constructions, one over the other. Between those temples, we are going to find the Moche city. Patiently, the archaeologists spend their time in doing researches about this ancient city in order to increase their knowledge about their customs and their culture. 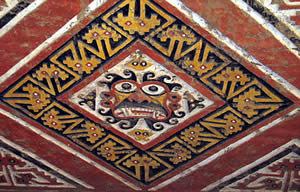 The El Brujo Archaeological Complex is an ancient monument of the Moche culture. It includes HuacaPrieta and the nearby pre-hispanic remains of Salinar, Moche, Lambayeque, Chimú. The Huaca El Brujo and Huaca Cao Viejo were built by the Moche sometime between 1 and 600 A.D. Huaca Cao Viejo is famous for its polychrome reliefs and mural paintings, and the discovery (1990) of the Señora de Cao (Lady of Cao), the first known Governess in Peru. 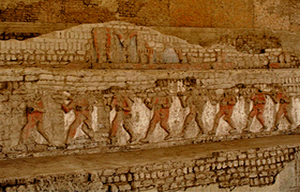 A female mummy, baptized the Lady of Cao, with complex tattoos on her arms has been found in a ceremonial burial site in Peru. Archaeologists say is one of the best-ever relics of a civilization that ended more than 1,300 years ago. The mummy was accompanied by ceremonial items including jewelry and weapons, and the remains of a teenage girl who had been sacrificed, archaeologists reported. Such a complete array has never been seen before in a Moche tomb. The presence of gold jewelry and other fine items indicates the mummy was that of an important person, but anthropologist John Verano of Tulane University said the researchers are puzzled by the presence of war clubs, which are not usually found with females.

Puerto Chicama or Malabrigo: 74 Km (46 miles) northwest of Trujillo (1 hour and 30 minutes by car). Located on a wide and very windy beach, Chicamais known among the surfers because it has the longest left-handed wave in the world. Fishermen's creek. It was of great importance in the Colonial age, and today one of the favorite places for the surf lovers, it has the highest waves in the world; here they have been carried out several international surf championships. 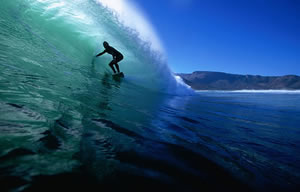 This show of Peruvian Paso Horse and marinera dance is realized in the place of "Asociación de Criadores de Caballos de Paso de la Libertad" (Association of Horse breeders and Owners), you can ride these horses and the event offer lunch in Palo Marino Restaurant with Peruvian and Trujillian cuisine. The show begins at 13:00. In addition, they offer tours on Peruvian Paso Horses. 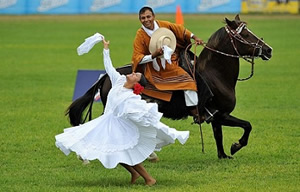