THE FOLKLORIC CAPITAL OF PERU

Puno was the territory of the Tiahuanacos (800 A.D. – 1200 A.D.) who were the highest cultural expression of the Aymara people that established themselves in what is today Peru and Bolivia. The Incas took over these lands in the fifteenth century, and the Spanish, attracted by the mining industry developed there, left an important Colonial legacy throughout the entire area. Today, the city of Puno (3,287 masl), which lies on the shores of Lake Titicaca, the highest navigable lake in the world, is the folklore capital of Peru and the site of the Feast of the Virgende la Candelaria. In the outskirts, you can visit the spectacular Chullpas de Sillustani, a complex of impressive burial towers built by the Kollas, Juli, famous for its beautiful Colonial churches, Lampa with its vice royal church built between 1675 and 1685, Llachón, a community that still maintains its centuries old customs and cultural expressions, and Pucará, known for its pre-Inca pottery and for the “toritos de Pucará” that the artisans of today create from clay. The lake contains numerous islands whose inhabitants continue to live as their ancestors have in custom and tradition. The Uros an example of this; this people group lives on “floating islands” that they have artificially made entirely of totora reeds, and they navigate in their traditional boats also made out of totora reeds. Taquile, Suasi, and Amantaníare known for their kindness of their residents, their ancestral skill in weaving, their pre-Columbian constructions, and lovely countryside. The Titicaca National Reserve (36,180 hectares) protects extensive stretches of totora reeds and various species of plants and animals. 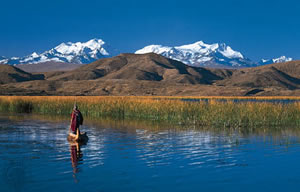 As Puno is located at such a high elevation, it experiences more extreme weather conditions than would be expected for its tropical latitude. The average annual temperature is about 15 °C, and the weather never gets overly warm. During the winter months from June to August, nighttime temperatures usually drop well below 0 °C. At this high altitude, the rays of the sun are very strong. Most of the annual precipitation occurs during the southern hemisphere summer, with the winter months being very dry. 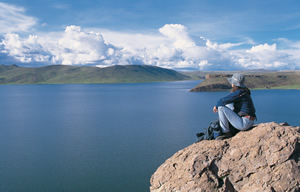 Transfer to the Port of Puno from your elected Hotel. After a beautiful motor boat journey (30 min.) amongst the reeds, we arrive to Uros, an archipelago of more than 60 manmade floating islands inhabited by the Uros, an ethnic group of fishermen, part of an ancestral group. Very few is known about their origins, a tradition tells that when an Inca king asked; who are you? They answered, “We are the first inhabitants on earth and have black blood”. In the colonial time they tried to live away the white man contact, but in the last decades they have made a more fluid contact with the main land culture, but still have bird’s hunting and fishing as their main activities. Stepping on these man-made reed platforms feels very much like a waterbed, however they are quite safe to walk on. Actually, you will observe a number of reed islands one next to the other, with houses and people on them.

Include: Transportation, guide and entrances fee
Duration: Half day
Time: 06:00AM 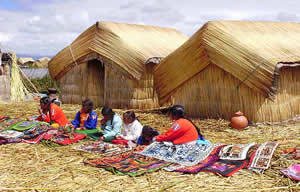 Pick up from your hotel. We then travel by bus through the Altiplano, "the High Plains". On the way, we observe the typical flora and rural scenes of this area. Upon arrival at the Sillustani Peninsula, we take a guided tour, which informs us about the local beliefs in the afterlife as well as observing the huge funerary towers known as “Chullpas”. Sillustani is a Peninsula surrounded by the Umayu Lagoon that gives the area an extraordinary contrast of colours and landscapes. We then return to Puno, visiting a typical farmhouse on the way. Arrival Back in Puno City. 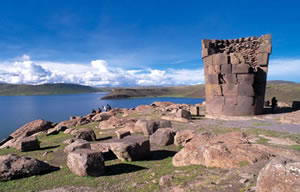 Early in the morning, we take a two-hour motor boat excursion on the waters of Lake Titicaca to the unique Floating "Islands" of the Uros. These ancient inhabitants of the lake, known as the Water Tribe, have built their own "islands" by periodically adding new layers of a type of reed unique to the area called "Totora". Their homes and boats are also made from this material. We continue our motorboat trip to Taquile Island, inhabited by Quechua-speaking natives who have developed efficient and unique social systems, as well as fine hand weaving techniques, down through the generations. Upon arrival at the Town of Taquile we will have a lunch. Then we will walk through the various hills and archaeological sites of this 6km long island. In the afternoon, return to Puno for overnight at selected hotel. 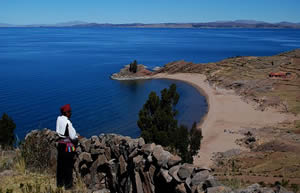 In this tour from Puno to Tiahuanaco, pick up the passengers at 6.30am, during our journey, we know different places like INCA UYO and the mystical gate of AramuMuru, we will stop in Pomata to observe the beauty of Lake Titicaca. When we reached the border, Desaguadero we present our respective documentation; when we will be in Bolivia, We will have our Bolivian guide to take us to our destination Tiahuanaco, where we have lunch and visit Puma Punku, Door of the Sun, Pyramid of Akapana, Museum of Stones, Monolith Beneth and Others. Then we will return to Puno, arriving at approximately 7pm. 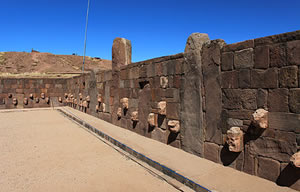 Early land transfers to Copacabana’s Sanctuary, board the Catamaran Cruise Ship, enjoying a snack while sailing to Sun Island, birthplace of the Inca Empire. In this legendary island you can visit the Garden, Stairs and Fountain of the Inca, then the itinerary includes a visit to the Inti Wata Cultural Complex, the largest private tourist attraction of Bolivia, including the underground museum of Ekako, the traditional medicine and the Titicaca Reed Shipbuilders display centers, the Pachamama agricultural Inca terraces, a handicraft center, the Intica’s lounge and at the MancoKapac look out of the largest Andean camelids. In addition, the Inti Wata Complex of Sun Island includes a unique sailing experience aboard a huge Titicaca traditional vessel for a panoramic visit to the Pilkokaina Inca Palace. Afterwards Board the Catamaran Cruise Ship to Copacabana while enjoying a lunch buffet, land transfer from Copacabana to Puno. 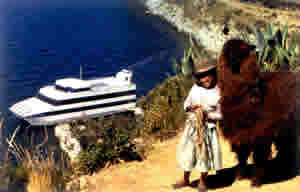 Early land transfer to the Copacabana Sanctuary, to board the Catamaran Cruise Ship; snack on board while sailing to Sun Island, In this legendary island is visited the Garden, Stairs and Fountain of the Inca, then the itinerary includes a visit to the Inti Wata Cultural Complex, the largest private tourist attraction of Bolivia, including the underground museum of Ekako, the traditional medicine and the Titicaca Reed Shipbuilders display centers, the Pachamama agricultural Inca terraces, a handicraft center, the Intica’s lounge and at the MancoKapac viewer of the largest Andean camelids.Also, the Inti Wata Complex of Sun Island includes a unique sailing experience aboard a huge Titicaca traditional vessel for a panoramic visit to the Pilkokaina Inca Palace. Board again the Catamaran Cruise Ship to Chua harbor while enjoying a lunch buffet, land transfer to La Paz, arrival at your hotel in La Paz. 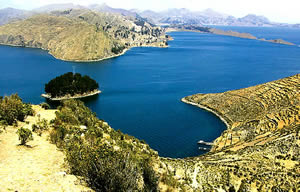