VALLEY OF MYSTERIES AND GOOD PISCO

Ica boasts characteristic dunes and a vast desert etched with enigmatic figures, the Nazca Lines, transformed into fertile fields by ancient cultures: The Paracas and the Nazca. Land of valleys, sun, beaches and a Natural Reserve inhabited by a lush variety of flora and fauna, it is also a mysterious land of villages, home of fine wine and "pisco", Afro-Peruvian music, and an oasis like the Huacachina, a patch of life in the heart of a blanket of sand. The province of Ica is located in the central south coast of the Peruvian seaboard. It is considered the center where the important pre-inca civilizations Nasca (300 years b.C.) and Paracas (700 years b.C.) developed. The men of Paracas practiced the trepanation of skulls on living bodies using knives made of "obsidiana", a certain kind of volcano rock. They also reached a great development in the art of weaving. The Nasca culture stood out for its admirable knowledge in hydraulic engineering building aqueducts and subterranean canals reinforced by inner walls of stone and roofs of huarango. 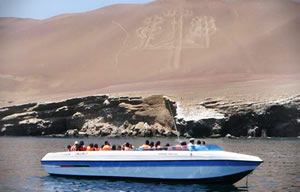 Ica lies on the border of the Atacama Desert and has one of the driest climates in the world with only around 1 inch of rainfall for the whole year. Temperatures are hot during the summer months (December - March) and warm through the winter months (June - September). 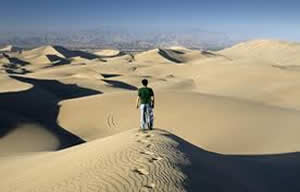 The Ballestas Islands is a vibrant and colorful wildlife sanctuary that is filled with wild birds and mammals, including sea lions, fur seals, and endangered Humboldt penguins. During this two hour boat tour you will come face-to-face with these animals in their natural habitation while you are onboard a speedboat. On rare occasions, it is even possible to see dolphins and whales. Obviously, this tour is a spectacular choice for animal lovers and birdwatchers. In addition to the animals named above, a wide range of seabirds also calls these rocky islands their home. You may see and hear pelicans, boobies, red-footed Guanay cormorants, and many other types of birds. During this tour, you can observe a mysterious geoglyph, similar to the Nazca Lines that was carved into the face of a cliff over 1,000 years ago. This symbol is called The Candelabra, and it remains the source of much speculation and debate. It likely was created by the Paracas tribe living in the coast at that time, for reasons unknown.

Include: Transportation, guide and entrances fee
Duration: 02 hours
Time: 08:00AM 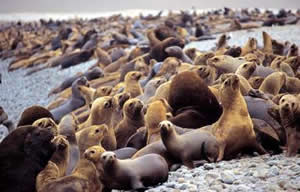 Paracas Reserve is a huge protected area located southwest of the city of Pisco. The name of this beautiful place is derived from a Quechua word meaning “sand rain” probably due to the strong winds that hit the evenings here. The Paracas National Reserve is also very important since in their inhabit waters abundant quantities of zooplankton and phytoplankton, which allows a variety of fish that allow industrial and artisanal fisheries. This is a very important activity in the town of Pisco. The Paracas National Reserve is located in an area of 335,000 hectares and is considered one of the most important ecosystems on the planet. During our visit, we will see the beautiful cliffs and beaches along this tour (red beach Yumaque, lagunilla). During this tour, we will stop at the lagunilla beach, where you can taste seafood and take a refreshing swim. We can also see groups of flamingos, to appreciate these beautiful birds will require a short hike to a small viewpoint, which will appreciate more closely. According to some historians, these birds inspired the Liberator San Martin to create the colors of our red and white flag. Then you can visit the interpretation center of the reserve, in this place we learn about the flora and fauna of the Paracas Reserve.

Include: Transportation, guide and entrances fee
Duration: 03 hours
Time: 11:00AM 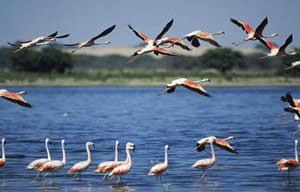 At the scheduled time, our guide will pick you up from your hotel. Then you begin with visiting one of the industrial warehouses where the grape brandy known as piscois produced. Here an experienced worker will conduct a guided tour of all the facilities so you can learn about pisco and wine. After completing the entire visit, you will be invited to sample the full range of pisco and wine produced in this place. After this tour, we will visit a traditional winery, which is located in the countryside Ica, where we learn about the development of pisco and wine in a traditional way. Here we will take a guided tour of each winery workers who will provide us with all information about the preparation of pisco and wine. They will then be invited to taste all the wines and pisco production. Our tour continued with a visit to the regional museum of Ica. This important museum offers insight on all the cultures that developed in this department, and will see important collections of ceramics, textiles, mummies, deformed skulls and remains of ancient cultures. Finally, we head to Huacachina where you can enjoy the beautiful scenery, take a walk around, and take photos. This place is surrounded by large dunes allows visitors to play some of the most popular sports here on sand table (sandboarding).

Include: Transportation, guide and entrances fee
Duration: Half day
Time: 09:00AM and 02:00PM 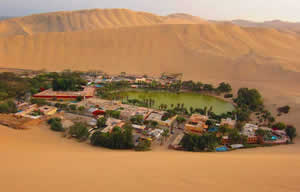 Ica department has one of the most beautiful deserts of Peru. This beautiful desert and coast Ica department make the ideal place to practice sandboarding. A popular sport known as table on sand. In addition, here we can make a beautiful tour along the desert in 4×4 buggies specially designed for this type of tour. On this tour, you will enjoy the beautiful scenery of the desert. Our tour begins in the lagoon of Huacachina. From this place will leave with direction Huacachina desert. This beautiful desert is composed of a variety of dunes. Here we make a tour along the dunes where we climb and descend many. Our experienced chauffeurs will make you enjoy from beginning to end. Also on this tour, the driver will stop at different dunes from these points you will have a panoramic view and can take their pictures of this wonderful desert and the valley of Ica. You can also make the practice of the table on sand in these dunes. For this type of excursion or for the practice of this sport on sand does not require any experience as our instructor guide will give you some lessons about the sport. After completing, the tour will return to the oasis of Huacachina.

Include: Transportation and guide
Duration: 01 hour
Time: Subject to coordination 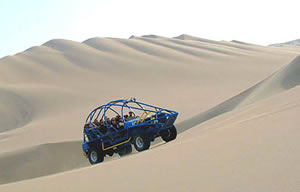 NAZCA Flight over the Nazca Lines

The Nazca lines are located in the Pampas de Jumana in the Nazca desert. On this dark plain of more than 500 square miles of the old men Nazca culture drew huge figures representing zoomorphic designs, fitomorfos, anthropomorphic and geometric and straight lines are drawn to travel hundreds of kilometers in different directions. The amazing thing is that these figures can only be appreciated in its entirety from the air, flying over the desert which has raised big questions about why the were made. Our staff will pick you up at your hotel and then head to the aerodrome Maria Reiche. At the airfield, you can see a documentary about the Nazca lines in the language of your choice as we await the order of the control tower for boarding the airplanes. We use small planes to see the Nazca Lines. There are hundreds of individual figures, ranging in complexity from simple lines to stylized hummingbirds, spiders, monkeys, and lizards. The Nazca lines cannot be recognized as coherent figures except from the air. Since it is presumed, the Nazca people could never have seen their work from this vantage point, there has been much speculation on the builders' abilities and motivations.

Include: Transportation, guide and overflight
Duration: 30 minutes or about 1 hours, it depends on the starting place
Time: Subject to coordination. 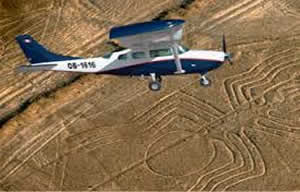 Cantalloc aqueducts,located 4 kilometers east of the city of Nazca, were built in stone by "hydraulic engineers" of the Nazca Culture. It consists of a network of irrigation channels and underground aqueducts, which still function, watering local crop fields. These Aqueducts are really filtering galleries, which car reach down to arount 12 meters in depth. Paredones, an Inca settlement from where you can see some lines called “The Lomm” because the have the appearance of a needle wrapped in bundles of wool and thread. 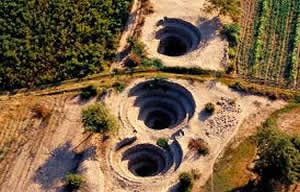 Chauchilla, an impressive Inca cemetery located about 28 kilometers southeast of Nazca town. It is thought that these ruins were built about 1100 BC. Some researchers state that more than 400 tombs were built and that 1000 corpses are buried here. Nowadays you can visit 12 tombs, with mummies of both children and adults. Return to your selected hotel. 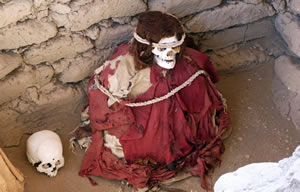