ATAHUALPA: THE FALL OF THE LAST INCA

The department of Cajamarca is characterized by slight slopes and highlands relatively low in comparison to the rest of the Peruvian Andes. The territory is made up of numerous valleys and gorges. The city of Cajamarca brings together three ingredients that make it an unforgettable destination: a magnificent Colonial architecture, beautiful countryside, and a rich history since it was the scene of an important episode of South American history. Here, the Conquistador Francisco Pizarro captured the Inca Atahualpa who, in spite of fulfilling his part of the ransom, was killed. From that point onward, the conquistadors drafted the city in the traditional Spanish way, and today the Colonial constructions of the Cathedral, the churches of San Francisco, Belen, and la Recoleta, mansions, and monuments are preserved. There are many excursion possibilities: the Inca Baths, thermo-medicinal hot springs where the Inca used to go after long trips, the Ventanillas de Otuzco (Otuzco Windows), a cemetery carved into a wall of volcanic rock, Cumbemayo, a demonstration of pre-Incan hydraulic engineering still functioning today, that is located in a wonderful natural area, the old hacienda La Colpa, where the cattle go to be milked at the sound of their name, KunturWasi, a commercial center that dates to the year 1100 b.C. and its site museum with the numerous examples of the oldest objects of gold in the Americas, the Porcón farm, an agricultural and cattle cooperative surrounded by a pine forest, ideal for spending a day out of the city, visiting its small zoo of vicuñas, deer, little spotted cats, monkeys, and eagles, buying its milk products, or simply enjoying the landscape. 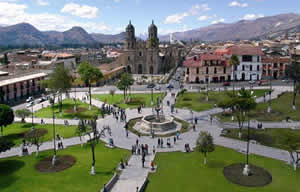 The city of Cajamarca has a semi dry and temperate climate. The annual average maximum temperature is 22ºC (71ºF) and the minimum is 5ºC (42ºF). The rainy season begins in October and ends in April. 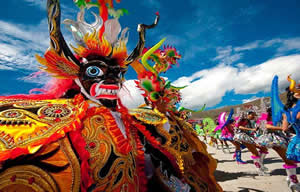 Churches and colonial large houses, conserved almost intact are an alive museum that waits for the visitor. Through the churches you will be able to appreciate the biggest architectural and artistic wealth in the Spanish colonization, with beautiful facades and great sculptural wealth in its interior. The main places are the Cathedral, Plaza de Armas (main square), The Complejo de Belén and his museum, The Church of San Francisco and his museum, the Ransom Room and Cerro Santa Apolonia in this hilltop you can overlook the city and appreciate the "Seat of the Inca" (pre-Hispanic carved rock), and visit many handcraft shops when climb or descent the hill. Is the area where you will find the main hotels, restaurants and craft centers of the city. 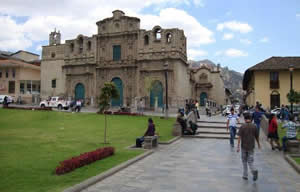 After the encounter between Inca Atahualpa and the Spanish Conqueror Francisco Pizarro and his army on November 16th , 1532, Atahualpa was arrested and imprisoned in his own royal room. The Spaniards with hunger of wealth offer Atahualpa´s freedom in exchange of gold. Atahualpa offered to fill the room with gold once and twice with silver as high as his extended hand could reach, and so he did. He collected the gold and silver from all over Tahuantinsuyo. Anyway, Pizarro ordered the execution of the Inca. This wealthy rescue is considered the most important ever paid in the human history. The room in which all this happened, today called "Cuarto de Rescate" (Rescue Room), was destroyed by the Spaniards, by the ends of XIX century and rebuilt at its original way, with ashlar and trapezoidal graves. 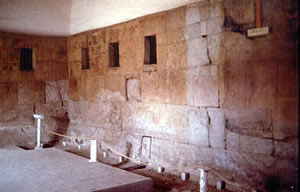 Located 5 km. (3.1 miles) east of Cajamarca, at the district of the same name. This is a place of warm medicinal springs, in which the Inca built pools and rooms for healing and resting. Being one of those for the exclusive use of the Inca,that still now is well preserved. In the areas around of "Baños del Inca", you may find contemporary constructions to obtain the benefits of the medical springs as a watering place.

Located 21 km (13 miles) southwest of Cajamarca, the highway that leads to it is half asphalted and the other half is not. This archaeological deposit belongs to the Caxamarca culture (XI Century), the biggest megalithic construction in America, covers an area of 25,000 sq/mt. There exist a fortress, sanctuaries and caves with stone carvings. Outstanding the water channels, considered as the maximum expression in hydraulic engineering. The aqueduct is channel finely carved in rock, with more than 1 km (0.62 miles) length and 1.5 m. (4.92 feet) gradient, traced forming borders and straight angles to control flow speed, avoiding the water to return and the erosion. 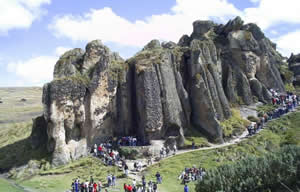 Archaeological center of the Caxamarca culture, located 8 km. (4,9 miles) north east of Cajamarca. Is a big necropolis of megalithic construction; the graves had been sculpted in the rock, superposed one on top of the other and protected against the rain with narrow channels. There are also galleries of graves that have 10 m. depth. Some rocks are carved with animal shapes. 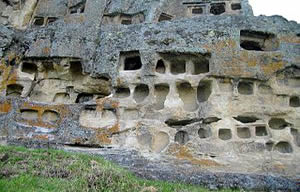 Cattle large farm, located 11 km (6.8 miles) southeast of Cajamarca. Every day at 4 pm. an employee calls out the cows for their name and each cow responds to the voice and proceed toward the stable, to the specific place designated for it where later will be milked. 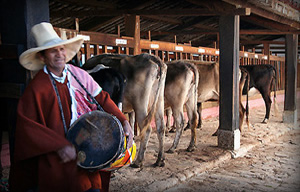 Rural cooperative offering an agro-tourism program in Cajamarca's northern highlands, including farming and animal husbandry. These activities include sowing and harvesting potatoes and other roots and garden vegetables, seed selection and soil preparation. It also features cow milking by hand, selection of breeding stock, visit to a plant nursery and participation in the pine wood rehabilitation and management program, which carries out a very successful project. It is a mini-zoo with animals of regional fauna. It is also possible to go on country walks or simply relax and enjoy the peacefulness and tranquility of the beautiful scenery surrounding the community. The inhabitants of the Granja Porcón farm offer an agro-tourist program where visitors can take part in a series of farming activities such as planting and milking cows by hand, live side-by-side with members of the community, giving them a window into their lifestyle, traditions and daily activities. The stay will also enable visitors to take part in festivals and rituals in addition to daily farm chores. It is a unique chance to swap living experiences in a balanced relationship with nature.