Arequipa is Peru's second largest city and was founded in 1540. The site was chosen for its proximity to the coast, enabling settlers to trade the products of Cusco and the mines of Potosi (Bolivia) with Lima. The local cultivation of wheat, corn and grapes all contributed to the region’s economic growth. The city is surrounded by three volcanoes; El Misti, still active at 5822m, the higher and extinct Chachani 6075m and PichuPichu 5571m. The Incas highly respected these volcanoes since the melt water from their snow-capped peaks form the headwaters of the mighty Amazon River, thousands of kilometers away.
Arequipa, known as the White City for its beautiful white walls of sillar, a volcanic stone. The downtown of the city, placed on the World Cultural Heritage list by UNESCO, features Mixed Baroque churches and mansions from the Colonial Period like the Monastery of Santa Catalina, a Spanish city in miniature with stone streets, beautiful patios, and plazas. Sabandía, Tiabaya, and Tingo, located among the large fields, are must see places, and the irresistible Arequipa cuisine is the perfect complement to the visit.
Just 3 hours and 45 minutes from the capital is the Colca River valley and canyon, one of the most extraordinary destinations in the country. Throughout the region, you can see colorful pre-Incan agricultural terraces still used today for growing quinoa, corn, barley, and wheat. During the pre-Hispanic era, the Collaguas and the Cabanas inhabited the department; today, the inhabitants have learned to conserve their Colonial churches in Yanque, Lari, and Madrigal, and they continue to wear their traditional clothing. 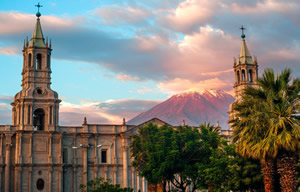 The climate of the city is predominantly dry in winter, autumn and spring due to the low atmospheric moisture and an effective precipitation corresponding to that of a semiarid climate. Arequipa has also 300 days of sunshine a year on average. Throughout the year, temperatures do not exceed 25 °C (77 °F) and rarely drop below 10 °C (50 °F). The wet season lasts from December to March and is marked by the presence of clouds in the afternoon and low rainfall. In winter (June, July), weather gets a little cooler and the temperature drops to an average of 10 °C (50 °F). 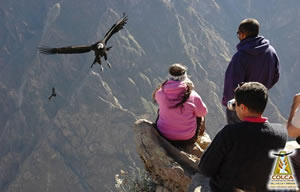 We start a three-hour sightseeing tour including the Santa Catalina Convent that was founded on the second of October in 1580 and has an extension of 20000 square meters and was constructed in the second half of the XVIth Century. The Convent, in which there are still nuns living in cloisters, is a walled small city with narrow streets, passages, staircases and small squares. Then we will visit the Plaza de Armas the Jesuit Church of La Compañía and its beautifully painted Chapel, the Church of San Francisco, the San Lazaro District, SelvaAlegre and the typical Districts of Cayma and Yanahuara for a magnificent view of the Misti Volcano. Return to the hotel.

Include: Transportation, guide and entrance Duration: 03 hours approximately Time: 09:00AM or 02:00PM 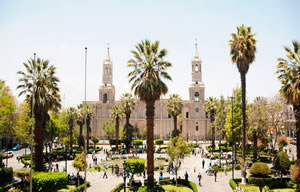 Located at 9 kilometers from the City, it is famous for its Colonial mill that dates from the XVIIth Century, where formerly the grains were ground that soon were distributed in all the South of Peru. In this place, of beautiful countryside, is the House of the Founder of Arequipa, Manuel Garcia de Carbajal. By its rustic airs, its showy pre-Hispanic agricultural terraces, its novo Hispanic and ten sided Republican large mansions, and the imposing presence of the volcanos Misti, Chachani and PichuPichu; Sabandía becomes an exquisite corner, with architectonic jewels of great historical importance.

Include: Transportation, guide and entrance
Duration: 03 hours approximately
Time: 09:00AM or 02:00PM

“Momia Juanita”, better known in English as "The Ice Maiden", is a 15th-centuryIncamummy of a 12- to 14-year-old girl Also known as the Lady of Ampato and The Frozen Lady, The mummy was remarkably well-preserved for 500 years, making her one of the more important mummy finds in recent years; indeed, this discovery was chosen in 1995 by Time magazine as one of the world's top ten discoveries. She was found in Mount Ampato (part of the Andescordillera), this was an extraordinary discovery. 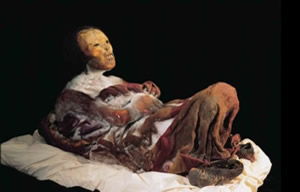 First Day : Early in the morning, after breakfast, departure by land on your excursion towards the Colca Valley driving across Pampa Cañahuas at the Aguada Blanca National Reserve, habitat of herds of Vicuñas and stopping at the Mirador de los Andes, the Crater of Chucura, the Mirador de Chivay, where beautiful pre-Columbian terraces still being cultivated by native Collaguas can be observed. The highest point of the road is at 4350 m.a.s.l. Arrival to the Town of Chivay at 13:00hrs. approximately. Transfer to your selected Lodge.
In the afternoon free time to visit Hot Spring Thermal and Medicinal Baths. Overnight.

Second Day: Early in the morning, departure to the "Condor's Cross" from where the great Andean bird, the Condor, may be spotted flying in circles above still farmed green pre-Hispanic terraces. Enjoy the impressive panorama of the Colca Canyon, one of the deepest in the World (3,180 mts.). On the way back to Chivay, visit to the Mirador of Chinina, where we will find the famous Hanging Tombs and the Hanging Bridge of Sifón that joins the Town of Yanque with Coporaque. At the Town of Yanque, visit its beautiful church and its characteristic cobbled stone streets among other attractions. To have spectacular views of the Colca Valley, we will drive to the observation points of Choquetipo and Artahuilque and to the Town of Maca.
Afternoon after short rest, return to the City of Arequipa, arriving at 18:00hrs. Approximately. 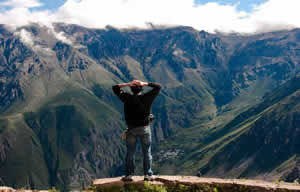 First Day : early in the morning, after breakfast, departure by land on your excursion towards the Colca Valley driving across Pampa Cañahuas at the Aguada Blanca National Reserve, habitat of herds of Vicuñas and stopping at the Mirador de los Andes, the Crater of Chucura, the Mirador de Chivay, where beautiful pre-Columbian terraces still being cultivated by native Collaguas can be observed. The highest point of the road is at 4350 m.a.s.l. Arrival to the Town of Chivay at 13:00hrs. approximately. Transfer to your selected Lodge.
In the afternoon free time to visit Hot Spring Thermal and Medicinal Baths.

Second Day: after breakfast, and very early we will go to the Cruz Del Condor (41 Km of Chivay) place since where you can appreciate one of the most beautiful sides of the Canyon and since where you can also appreciate the beautiful Condors when they are flying. We will come back visiting small towns like Pinchollo, Maca, Yanque, and The Viewing points of Antahuilque, to see the Andenes (Platforms), made by the Incas, we will also visit Choquetico. At midday we will have Lunch in Chivay (not included), After that we will start our travel to Puno, by the same way that we use the first day, but we will turn in Patahuasi, on the way we will see different Andean landscapes, as stones forests, huge lakes with a great Varity of birds, we will also go through the small towns of Imata, Santa Lucia and the city of Juliaca. After 6 hours we will be arriving in Puno. 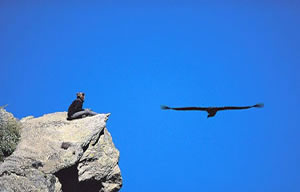